Working hard for the bald ibis

The bald ibis is one of the most highly endangered bird species in the world. It was extirpated in Europe in the 17th century. Schönbrunn Zoo has supported the efforts to study and reintroduce this fascinating bird since the onset of this project in 2002. The bald ibis is a migratory bird. It needs to learn its flight route to the overwintering grounds from its parents within the first year of its life. This flight tradition, however, was lost with last free-living bald ibis in Europe. In the framework of a new LIFE project, three new breeding colonies are being founded in Goldau (Switzerland), Bussolengo (Italy) and in Rosegg (Austria) in addition to the three previously established colonies in Austria and Germany.

Chicks that hatch in zoos are hand-raised and therefore imprinted on human foster parents. These foster parents then show the birds the flight route – as co-pilots in ultralight airplanes (human-led migration). The trip takes them to the overwintering grounds around the nature reserve WWF Oasi Laguna di Orbetello in Tuscany. At an age of two to three years, the bald ibises can migrate independently to the brooding grounds and brood there: they can then take their own young down south and establish their own migratory tradition.

In 2021 a total of 56 juvenile birds could be released into the wild. By now, the region of the Alps is home to around 199 Northern Bald Ibises. The goal is to increase the population to 357 individuals. According to calculations this amount is needed for the species to survive independently in the future. The hard work and dedication of all partners in the EU-funded LIFE project led by Schönbrunn Zoo still is the only chance for preserving this bizarre bird for future generations in its natural habitat. The project‘s motto „Reason for Hope“ is no coincidence: In 2021, 36 chicks have hatched in the wild – the offspring of Northern Bald Ibises which were re-introduced in recent years.

Two of the major causes of mortality in the free-flying population are poaching (in Italy) and electrocution at unsafe overhead powerlines (in Austria). In order to protect and to study also those ibises, which hatch in the wild in the long term, many individuals are being equipped with small transponders. The GPS signals emitted by those birds, allow us to follow their migration routes continuously via the App „Animal Tracker“. 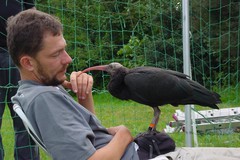 Johannes Fritz, director of the “Waldrappteam Conservation & Research” (bald ibis team):  "Our work would hardly be possible and the survival of the bald ibis in grave doubt without the international, stable zoo population. Schönbrunn Zoo is therefore a crucial partner for the success of our species protection project, both as a resource for chicks and as an important funder. Our combined efforts can help ensure that the bald ibis once again returns to parts of its historical range.” 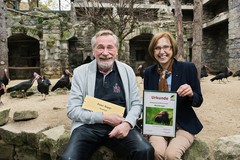 Peter Rapp, honorary bald ibis patron:  The show host Peter Rapp has a soft spot for this bird (whose German name – Waldrapp – shares the same word root). He is an honorary patron of Schönbrunn Zoo’s bald ibises and, together with the zoo, is helping draw attention to the reintroduction project. In Peter Rapp’s own words: “Their curved beaks, bald head and black feather crest makes these birds look quite odd, and I have a soft spot for odd fellows.”

Scientific publications on the bald ibis: