Many of the animal species that live at Schönbrunn Zoo are part of an international captive breeding program. For each species, a studbook keeper provides recommendations for pairing the animals or putting together groups. The underlying concern is to ensure that the population under human care remains genetically healthy. This enables zoos to exchange animals to the benefit of all.

European Endangered Species Programs (EEPs) are coordinated by the EAZA, the European Association of Zoos and Aquaria. The preliminary step of any EEP is to keep a European studbook (ESB). Global studbooks that encompass the global population of an animal species in zoological gardens also exist, as do studbooks for endangered Austrian domestic animals. The latter are coordinated by Arche Austria.

Two EEPs are coordinated at Schönbrunn Zoo. The studbook for the northern and southern rockhopper penguins is kept by Sabine Frühwirth, that for the Fiji iguanas by Anton Weissenbacher. 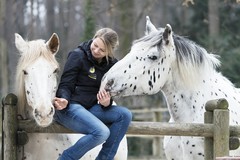 Dipl. Biol. Simone Haderthauer, Zoological curator at Schönbrunn Zoo and member of the EEP Committee for the greater Indian rhinoceros, Vietnamese sika deer and palm cockatoo: “Contributing to a captive breeding program is a truly worthy endeavor. We also incorporate species that are not included in any international program. We have measures in place to ensure reproduction in about 280 animal species ranging from corals to Noric horses. Zoos are the only institutions in a position to keep so many endangered animal species and breeds. The knowledge and experience gained from caring for such animals often prove to be crucial for projects in the wild.”

Animal species at Schönbrunn Zoo in an endangered species program: