Species Protection in the Wild

Beyond education, recreation and research, nature conservation and species protection are among the major missions of a scientifically managed zoo. This explains why Schönbrunn Zoo is participating in conservation projects in the wild. The zoo provides funding, participates in captive-breeding programs, conducts public relations work, contributes expertise and actively supports research efforts. This has meant a long-term commitment to numerous projects. Several projects are being conducted in faraway countries, others are anchored in Austria. 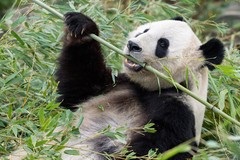 In striving to protect the giant panda, Schönbrunn Zoo is closely cooperating with the China Wildlife Conservation Association (CWCA). The zoo is disseminating its expertise in the framework of nature conservation management seminars and contributes financially to maintaining and establishing nature reserves. more information 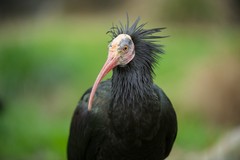 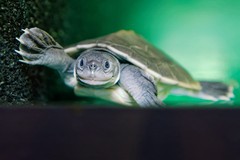 The batagur (river terrapin) is one of the three rarest turtle species in the world. In 2010 the zoo proudly announced the world’s first-ever captive-bred hatchling. Beyond the important captive-breeding program, the zoo initiated a rescue operation in Bangladesh and southern India. more information 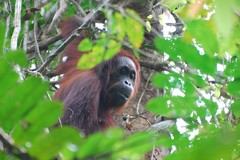 Habitat loss is proving to be a major threat to orangutans. The Red List classifies these fascinating great apes as threatened with extinction. Schönbrunn Zoo is supporting the research and nature conservation measures being conducted in the framework of the Hutan project on Borneo. more information 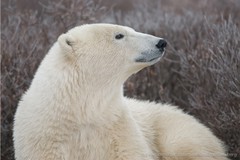 Climate change is literally causing the ice to melt away under the paws of Arctic polar bears. According to the most recent estimates, only about 20,000 polar bears still survive in the polar regions of the North. The zoo also supports the project of Polar Bears International, one of the major initiatives to save these bears. more information 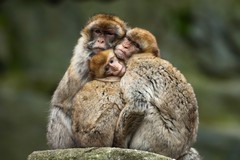 Habitat destruction is the main threat facing Barbary macaques. The zoo is a supporter of the species protection project Barbary Macaque Awareness and Conservation (BMAC), which conducts education programs and is working to help ensure that illegally captured macaques are released again. more information 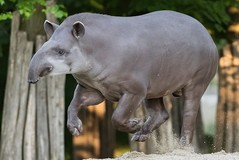 The major threats facing this tapir are poaching and habitat destruction. In the framework of a research project in the Pantanal in South America, collar tags are providing insights into the lifestyle of these animals, and local residents are being informed about “their” fauna. more information 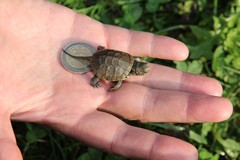 The European pond turtle is the only turtle species native to Austria, but its populations are declining dramatically throughout Europe. In cooperation with the Alluvial National Park (Nationalpark Donau-Auen), home to Austria‘s last intact population, the zoo is conducting a species protection project. more information 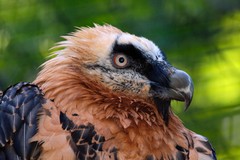 Maligned as carrying off children and lambs, this harmless bird was eradicated in the early 20th century. Over the past 30 years, captive-bred animals from zoos have been used to successfully reintroduce this species. The individuals currently inhabiting the high alpine mountains include birds that hatched at Schönbrunn Zoo. more information 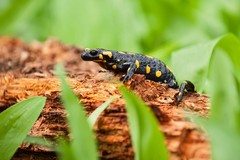 The fungal disease chytridiomycosis poses a threat to amphibians. In Europe it is caused by two fungi, one of which – Batrachochytrium salamandrivorans, abbreviated Bsal – was only recently discovered. Wherever it crops up, the salamander populations rapidly decline to low numbers. The zoo is studying the potential infection status of Austrian salamanders and newts in cooperation with many additional institutions. More information 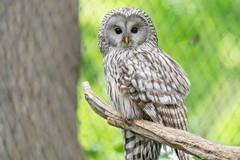 Habitat loss was responsible for the extinction of the Ural owl in Austria. The improved environmental conditions prompted a reintroduction project supported by Schönbrunn Zoo, which contributed its own captive-bred chicks. more information 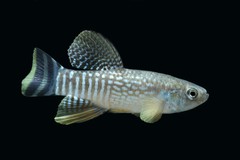 Globally, around 20 species of these small fish (maximum length: 6 cm) have been described. Almost all of them are highly endangered. Schönbrunn Zoo keeps and successfully breeds about 18 species of this genus. Two of them are already extinct in the wild. more information 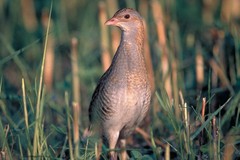 Two brooding sites of this rare meadow bird in Austria are located in meadows managed by Schönbrunn Zoo in the Vienna Woods. The zoo strives to preserve the diversity of plant and animal species in the Vienna Forest. more information 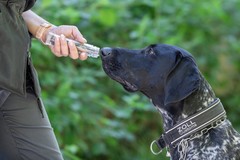 A suitcase filled with rare parrots or chameleons, small turtles, snakes or spiders: Organized trafficking of endangered animal species is a billion-euro business and a serious threat to biodiversity on a global scale. Even tourists may unknowingly buy souvenirs manufactured from endangered animal species, such as hawksbill turtles or corals. For many years the Austrian Customs Authority and Schönbrunn Zoo closely collaborate in the fight against animal trafficking. more information