The Brazilian tapir plays an important role in shaping the landscape. By distributing plant seeds via its droppings it contributes to preserving biodiversity and helps structure the habitat.

These tapirs are threatened by poaching, habitat destruction, and cattle ranching along with the threat it poses by transmitting diseases. A low reproductive rate aggravates the problem.

Schönbrunn Zoo supports a research project by the Institute for Ecological Research (IPÊ - Instituto de Pesquisas Ecológicas) on the Brazilian tapir in the Pantanal. The Pantanal is one of the largest contiguous wetlands in the word, encompassing an area of 160,000 km². Its species-richness is also second to none. Only 2.6% of this region is under protection. Human activities currently affect 40% of the overall surface area in the Pantanal.

Several tapir individuals here were equipped with collar tags, which provide information about the requirements of the tapirs in their habitat and monitor their health status. This is accompanied by camera traps, which help study their social organization and reproductive behavior. These data are instrumental in developing a protection and management plan for Brazilian tapirs in the Pantanal. In a parallel effort, an extensive education program is in place to inform local residents – especially children and teenagers – about the native fauna and its complex ecological interrelationships.

The aim of the project is to gain more information about Brazilian tapir and help develop targeted protection measures. At the same time, local residents need to be better educated about “their” fauna – in keeping with the motto “You only protect what you know.”

This is how the zoo is supporting the project: 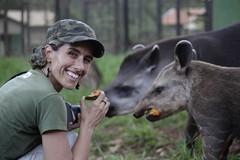 Patrícia Medici, Flachland-Tapir initiative, IPÊ - Instituto de Pesquisas Ecológicas, IUCN/SSC Tapir Specialist Group (TSG): "Zoo grants comprise approximately 80% of the funding of the Lowland Tapir Conservation Initiative in Brazil. This incredible support has allowed us to establish the Lowland Tapir Conservation Initiative as a nation-wide effort that operates in all biomes where the species occurs. I strongly believe that zoos play a major role in species conservation worldwide."