Polar bears have become a sad symbol of climate change. According to recent estimates, only about 20,000 animals still inhabit the polar regions of the Northern Hemisphere, and the numbers are dwindling. Global warming is the key threat. In their Arctic home, the ice is literally melting away under their paws. Intact pack ice, however, is a prerequisite for their survival. If this is lost, they will become unable to hunt for their prey, mostly seals. Unsuccessful hunts mean that the mothers have difficulty raising their cubs. Mating also become a problem because the animals are often separated by enormous stretches of open water and have difficulty finding one another. Marine pollution poses an additional threat, as does the destruction of the Arctic landscape by industrial enterprises.

Schönbrunn Zoo is actively supporting the project Polar Bears International (PBI), one of the major initiatives to save the polar bear. Research in the field is an important measure: the collected data are essential to draw conclusions about the life habits  of the bears. This means equipping the animals with satellite tags. Such tags help document the animals’ migratory pathways, habitat use and hunting strategies.  Data on the survival rates of the juveniles are also being collected. After about 12 months the satellite tags are removed and the data evaluated. Beyond the fieldwork, PBI also provides emergency help and, among other tasks, also cares for orphaned polar bear cubs.

Schönbrunn Zoo is currently sponsoring the satellite tag on the female ‘Hope Vienna’ (tag number X32491). Her migration route can be followed online on the so-called “Bear Tracker Map”. Importantly, our Polar Dome – the visitors center of the new polar bear world at the zoo – is one of PBI’s Arctic Ambassador Centers. PBI has about 50 Arctic Ambassador Centers in leading zoos, museums, research centers and aquariums. Artic Ambassador Centers convey an urgent message: “Together, we can save the polar bears and their Arctic environment, but we have to act fast.” This encompasses key issues such as climate protection and environmental pollution alongside research projects designed to protect the fauna of polar regions. Take a look at the suggestions and tips on what each of us can do to protect the environment and help save polar bears

The aim is to make data-based predictions about where polar bears can be expected to live in the future considering the various ice thickness projections and distribution scenarios. This will provide the basis for establishing appropriate protected areas in which the animals can find sufficient food and raise their offspring without undue disturbance.

This is how the zoo is supporting the project:

The polar bears at Schönbrunn Zoo are ambassadors for their threatened kin in the wild. 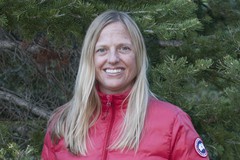 Krista Wright, Executive Director at Polar Bears International (PBI): “The Vienna Zoo is cooperating in a species protection project that uses satellite transmitters to document the migratory routes and habitat use of free-living polar bears. The more we know about polar bears and their needs, the better measures we can take to protect their habitat.”