The batagur (northern river terrapin) has become one of the three rarest turtle species in the world today. In the previous century these animals were widely distributed in the rivers of southeast India, Bangladesh and Myanmar. Unabated overfishing and egg collection brought this river terrapin to the brink of extinction. The turtle populations remained more or less stable as long as they were captured and consumed only to help cover the basic needs of local human residents. That all changed when the hunting took on industrial dimensions and enormous numbers of animals were exported to China at great profit. In 2010, only 20 individuals were still reported worldwide.

Four batagurs, including 2 pregnant females, were donated to Schönbrunn Zoo by the researchers and turtle experts Rainer and Peter Praschag from Graz in April 2010. The tireless father-son team tracks down endangered turtles around the globe and quite literally saves them from the cooking pot. In May 2010 the zoo successfully captive bred individuals of this species for the first time ever – a true sensation. This yielded a wealth of new information that proved to be highly valuable for subsequent captive-breeding efforts.

The controlled breeding in captivity was an essential emergency measure to ensure the survival of the species; this approach provided new insights and enabled targeted conservation measures in the natural habitat. In cooperation with Peter Praschag and the Turtle Survival Alliance (TSA), Schönbrunn Zoo initiated the rescue mission for the batagur in Bangladesh. The turtles, which can grow to a length of 60 cm, were tracked down in village ponds, purchased, and transferred to a captive-breeding center in Bhawal National Park, accompanied by staff members of the Bangladesh Forest Department. This facility guarantees protection for these rare animals and optimizes breeding efforts. To minimize the risks and as a base station for a future introduction project, a second facility in Karamjal was adapted in 2015 for part of the group.

The declared aim is to enable steady reproductive success for the northern batagur and thus ensure its long-term survival. Both stations are now successfully captive breeding the turtles and raising the juveniles. The next step is to reintroduce the animals to suitable areas with the help of local residents. A prerequisite for such a reintroduction is to collect information about the habitat requirements, the migration routes and the nesting sites of the animals in Bangladesh, for which only very few data are available. 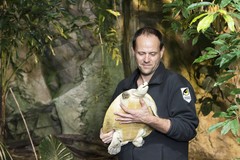 Anton Weissenbacher, Project supervisor and Zoological curator, Schönbrunn Zoo: “The 'Batagur baska' project is currently one of the most successful zoo projects worldwide – thanks to the personal initiative of participating zoologists and partners, but above all to our sponsors. In a combined effort, we have successfully captive bred hundreds of individuals of one of the most endangered turtles in the world. We are hard at work to reintroduce this endangered species.” 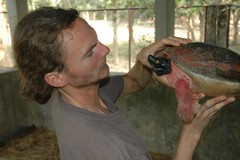 Peter Praschag, field biologist and turtle expert:  “Time is very quickly running out for this species. The batagur would simply go extinct within a few years without the successful captive-breeding programs in zoos and research stations."