A mere 100 years ago the Ural owl, the second largest owl in Central Europe after the eagle owl, still inhabited Austria’s forests. In the mid-20th century the species was already pronounced extinct here. The Austrian owls, however, represented an important link between the populations to the south (Slovenia/Italy/Croatia) and to the north (Germany/Czech Republic). Up until today, this bridge has remained interrupted.

In recent decades the environmental conditions have improved for the Ural owl. Today, valuable forest habitats are protected or under sustainable management. For this reason, the Research Institute for Wildlife Ecology at the University of Veterinary Medicine Vienna has initiated a reintroduction project.

Young owls that have hatched in zoos and captive-breeding stations are transferred to release sites, where they spend several weeks in aviaries in order to familiarize them with the new surroundings before they are released into the wild. Since the start of the project, several hundred young owls have found a new home in two protected areas, namely “Biosphärenpark Wienerwald” and “Wildnisgebiet Dürrenstein”. And the success has been astounding: they have already produced numerous offspring in the wild.

Since 2012, the Austrian Zoo Organisation (OZO), of which Schönbrunn Zoo is a member, has also helped monitor Ural owls brooding in the wild. In the 2012 breeding season, they identified 19 of a total of 22 breeding owls. This included the female ‘Aulelia’ from Schönbrunn Zoo: she had 3 chicks in her nest.

This project is designed to build up a self-sustaining Ural owl population. The aim is to once again make these owls native to Austria’s forests.

This is how Schönbrunn Zoo is supporting this project: 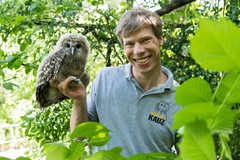 Richard Zink, director of Habichtskauz.at: “The reintroduction project would probably never have transcended the early visionary phase without the commitment of the Austrian Zoo Organisation. The owl’s comeback would never have gotten off the ground without the international, stable zoo population. As a competent partner, Schönbrunn Zoo has been a major player in ensuring that chicks are captive bred – a foundation for the success of this species protections project. The first successfully brooded chicks in the wild underline the efficiency of the cooperation between our Research Institute for Wildlife Ecology at the VetmedUni Wien and Schönbrunn Zoo.”

Silke Kobald, District Mayor of Hietzing: Hietzing mayor Silke Kobald’s enthusiasm for the reintroduction project prompted her to become a sponsor for Schönbrunn’s Ural owls. She named one of the four owl chicks that hatched at the zoo in April 2014 ‘Hietzi’. Her comment: “The district of Hietzing, part of which lies within the boundaries of the Wienerwald biosphere park, also boasts a project release site – we’re proud to provide good environmental conditions for these rare birds.”