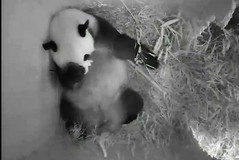 Great joy at Schönbrunn zoo: At 14th August a baby panda made his entrance into the world. So far, no other European zoo has managed to naturally breed this species. At Schönbrunn zoo this is already the third time that a young panda has been born. The keepers could already tell by the female panda Yang Yang's behaviour that the birth was imminent. „Since Tuesday Yang Yang left the breeding box only for a few minutes at a time to get some bamboo and to defecate. At 12.24 hours we heard the baby's squeeking for the first time" explains Dagmar Schratter, the zoo's director. „Although we are of course very happy, we must remain realistic. The mortality rate for Giant Pandas is around 40 percent during the first year."

The baby panda is around 10 centimetres long, pink-skinned and covered with white fluff and weighs approximately 100 grams. Yang Yang and her baby will spend the next few months in the breeding box, the exact time span will be their decision. The last panda young Fu Hu showed himself to the public for the first time towards the end of December. The panda house will remain closed for the time being so that mother and baby can get the peace and quiet they need. The baby's sex could not be determined yet, as the keepers do not want to disturb them. In the wild, panda fathers take no part in raising the young and this is why Long Hui has been separated from the female and her baby.

Giant Pandas are a highly endangered species. There are now only around 1.600 animals living in the Southwest of China. Most of the zoos and breeding stations keeping pandas rely on artificial insemination. With the birth of Fu Long on the 23rd of August 2007 and his brother Fu Hu on the 23rd of August 2010, Schönbrunn zoo has succeeded twice already in breeding Giant Pandas by natural conception. No other European zoo has managed this zoological sensation so far and here this has now been achieved for the third time. The other two pandas born in Schönbrunn, Fu Long and Fu Hu now live in China.

Schönbrunn is one of four zoos in Europe to keep Giant Pandas. All these pandas, just like the young one born yesterday, are the property of the People's Republic of China. For the next  two years, the young animal will stay in Vienna. In March, the 10-year loan contract with the China Wildlife Conservation Association expired as planned, negotiations for a new loan contract have already been completed. Until this has been signed an interim contract is in force. 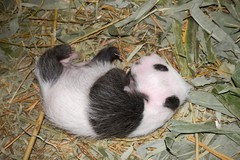 All good things come in threes: the third panda baby born in Schönbrunn Zoo is male, just like the previous two young pandas Fu Long and Fu Hu. The animal keepers found this out after glancing through the side flap of the breeding box. „In the beginning, panda mothers never leave their young even for a moment and even do without food during that time. Meanwhile, Yang Yang has already left the breeding box a few times to eat bamboo and to drink some water so that the keepers saw a chance to snap the first photos of the baby bear."

Having discovered the panda baby's sex, one can start thinking about giving him a name. Nevertheless, according to Chinese tradition, a name is given at the earliest 100 days after birth. The pictures show quite clearly how splendidly the young panda has developed in the first month of his life. Schratter: „At birth he weighed around 100 grammes, but now he has developed quite a milk tummy and tips the scales at approximately 1,2 kilogrammes, which is just right for his age."

The young animal is still blind and cared for lovingly by his mother Yang Yang. Every five hours or so the little panda cuddles up to her breast and suckles intently all the while making satisfied, smacking sounds. At the beginning, the baby panda was only covered in fine fluff but now his fur is quite thick and shows the black and white markings typical for Giant Pandas.  On ears, shoulders, legs and around the eyes some black hairs have grown already. 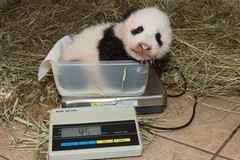 The young panda in Schönbrunn Zoo has been weighed. Typically panda, the little one was so sleepy that he was hardly aware of the process. The impressive result: four and a half kilos. „The panda boy is developing splendidly and weighs even slightly more than the first two young animals at that age", explains the zoo's director Dagmar Schratter. Nevertheless, it will be quite some time before the black and white fur ball will have reached his father's weight. Long Hui, the male panda tips the scales on average at an impressive 120 kilos.

Just like his parents, the baby panda is now being weighed regularly. This way, the keepers can always check if he keeps gaining weight." There is ample opportunity for this procedure as mother Yang Yang leaves the little one alone in his breeding box for up to 15 hours a day. When she is with him, she cares lovingly for him, suckles him and massages his tummy in order to stimulate his digestion." Slowly but surely the young panda is beginning to show an interest in his surroundings. „He cannot crawl yet but he repeatedly peeps out from his breeding box. We hope that he will show himself to our visitors towards the end of the year". 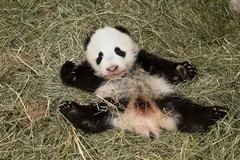 The panda boy at Schönbrunn Zoo has now been given a name. He will be called Fu Bao. After Fu Long, the happy dragon and Fu Hu, the happy tiger the third Panda young in Vienna Zoo will be the happy leopard. „Along with the dragon and the tiger, the leopard in China is another very brave and strong animal. Bào is a very popular boy's name, as it is supposed to give its bearer the strength of a leopard" explains the zoo's director Dagmar Schratter the meaning of this name which the keepers have chosen for the little one.